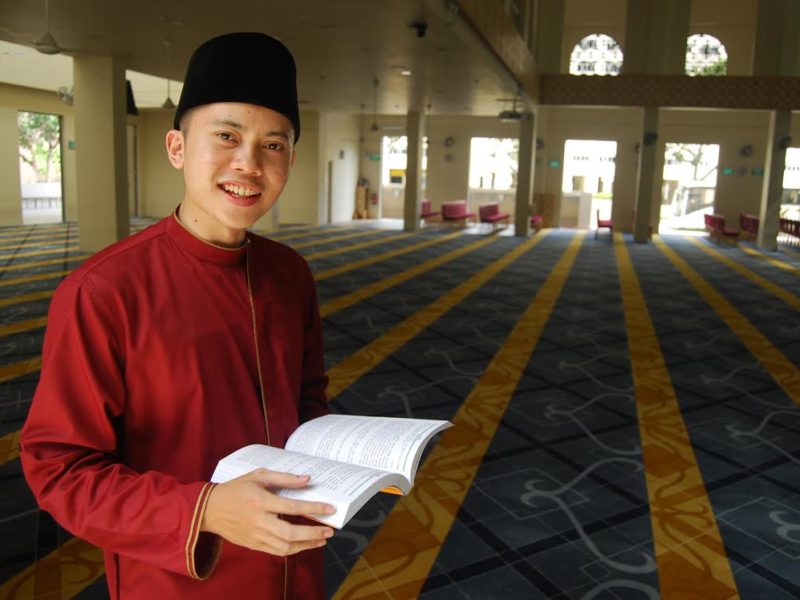 Every free time, especially on weekends, Mr Sadiqul Amin Mazlan can be found at Masjid Al-Taqua or Masjid Kassim. There, he will carry out duties as imam, muazzin, part-time teacher or assisting in administrative works.

However on normal days, the 25 year old is busy attending lectures and going through paper works as an undergraduate and the Singapore Institute of Technology (SIT).

Mr Sadiqul is one of the many success stories from Madrasah Al-Arabiah Al-Islamiah (MAI) in nurturing individuals who not only excels in academic studies but also holding strongly to Islamic values.

Sadiqul Amin studied in MAI from 1998 to 2008 – from primary one to secondary four – and had done the Madrasah proud when he managed to clinch the Singapore-Industry Scholarship for his studies in Civil Engineering in SIT.

“As we all know, facilities and equipment in Madrasah are not as advanced as those found in national schools. Despite so, I see it as a challenge and motivation to continue working even harder to achieve the best I can in my studies,” said Mr Sadiqul.

He described Madrasah education as a holistic learning experience – nurturing students in academic studies while at the same time instilling good Islamic values. Mr Sadiqul also added that support from his family played an important role in the positive development that he grew up with.

Looking back on his experiences back in MAI, Mr Sadiqul said that his teachers gave him a lot of encouragement. School environment, though lacking in many areas, is still sufficient in driving him to become a Muslim of excellence in terms of knowledge, akhlak and character.

“Teachers in MAI have always been an inspiration to me,” said Mr Sadiqul.

He had once held the position of president of the student council in MAI and was thankful for the experience which had “given a lot of opportunities to sharpen leadership skills through organising events and camps as well as to guide students in terms of discipline and represent them for their welfare.”

“Knowledge is not just in the books, because it is not meaningful if not practised in real life,” he added.

Hence he now spends much of his time in mosques because he wants to give back to the community and become a role model to youths through practising the sunnah of Rasulullah s.a.w.

Other than giving back through mosques, Mr Sadiqul, together with other MAI alumni continue to find ways to contribute back to their Madrasah. For one, they have donated software to be used for the Madrasah computers.

“Since young, I have been nurtured by my family to always think of others and of ways to make our community better. Alhamdulillah, as a result, I have become someone responsible and with good insights, understanding what must be done.

“InsyaAllah with these values, I hope to make this world a better place,” said Mr Sadiqul who will be graduating this year.

Article was translated from Malay and was first published in Berita Harian on 10.06.2016 and later republished on MAI website.
Taken from: https://www.mai.edu.sg/alumni-talks-1/